Who Is Liable For A Lane Change Accident? 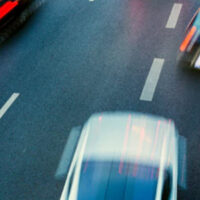 Car accidents can happen for a variety of reasons, but many occur when motorists attempt to change lanes, sometimes without keeping an eye out for other cars. Although lane change accidents are relatively common, determining liability for these collisions isn’t always straightforward. If you have questions about liability after a lane change accident, consider calling an experienced Tulsa auto accident lawyer to learn more about your legal options.

Most lane change accidents are the result of at least one driver’s negligence. This could include everything from driving while distracted or falling asleep at the wheel to merely failing to check their rearview mirrors and blind spots. Other factors, however, could play a role in these types of crashes. Poor visibility, for instance, makes it more likely that a person will be involved in a lane change accident, especially when there is heavy rain or snowfall. Under Oklahoma law, drivers are only allowed to make lane changes when it is reasonably safe to do so, which means that it is the responsibility of the driver who is changing lanes to:

Drivers who fail to take these steps and who cause an accident as a result can be found liable for causing a lane change collision.

When an at-fault driver denies liability for a lane change accident, the injured party will need to prove that the other driver acted negligently. This can be achieved by collecting strong evidence, such as:

Fortunately, even if this evidence demonstrates that an injured party contributed to an accident in some way, he or she won’t necessarily be barred from recovery. This is because Oklahoma adheres to the standard of modified comparative negligence, under which at-fault parties can still recover compensation for their losses, albeit in an amount reduced by their degree of fault in causing the accident. This is only true, however, for accident victims who are found to be 49 percent or less at fault for a crash.

Proving fault for lane change accidents can be complicated, which is why it’s a good idea for injured parties to speak with an experienced Tulsa auto accident lawyer before pursuing their claims. To learn more about how the dedicated attorneys at Levinson Law, P.C. could help with your own claim, call 918-492-4433 today.

By Levinson Law, P.C. | Posted on May 13, 2022
« Car Accident Risks For Pregnant Victims
I Was Driving A Rental Car At The Time Of My Accident – What Does That Mean For My Claim? »