Why Are Rollover Accidents So Dangerous? 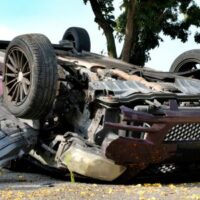 There are many different types of car accidents. Some, however, tend to cause more traumatic injuries than others. Rollover accidents, for instance, are notorious for their high risk of catastrophic injuries, a trend that is largely due to the fact that victims can sustain multiple injuries as the vehicle rolls. In fact, these kinds of accidents are thought to account for nearly one-third of all vehicle occupant fatalities. For help filing a claim against the person responsible for your own rollover accident, please reach out to a dedicated Tulsa auto accident lawyer today.

Any vehicle can roll over during an accident. Top-heavy vehicles, like SUVs and trucks, however, tend to be more prone to rollover accidents. These crashes often begin with a “tripping” event, where a vehicle strikes an object that causes it to stop suddenly, such as a large pothole, a curb, or even a median. Ramps and guardrails can also cause flip-over and climb-over accidents, leaving the vehicle to land on its side or top. Speed is often a factor in these kinds of crashes. Generally, the faster a car is going, the more likely it is to flip over upon colliding with another object.

What Happens to Passengers During a Rollover Accident?

The severity of the injuries sustained by someone who was involved in a rollover accident will largely be dictated by whether or not that person was wearing a seat belt. Victims who aren’t wearing seat belts, or whose seat belts disengage during the accident, for instance, can expect to be thrown around the interior of the vehicle. Each time someone’s body comes into contact with a part of the vehicle, he or she could sustain additional injuries, including multiple fractures, internal injuries, and severe lacerations. In some cases, victims can even be ejected from the vehicle entirely, coming into contact with the vehicle itself, or the ground. The potential for a catastrophic or life-threatening injury is especially high in these situations, as victims could find themselves crushed by the vehicle itself.

Even those who remain securely fastened during a rollover accident could still sustain serious injuries, as there is nothing stopping other items inside the vehicle from striking the victim, causing blunt force trauma or penetrating injuries. As the vehicle rolls, the victim’s arms and head could strike the ground as the windows break and the doors crush inward. Cabin intrusion, which occurs when the frame of a vehicle collapses, could even trap the victim inside the vehicle.

For the reasons we mentioned earlier, victims in rollover accidents usually sustain multiple injuries, including:

The catastrophic injuries that are often the result of rollover accidents can result in extensive medical care. Many victims require it full-time while they recover, while in other cases, a victim may struggle with permanent disability for the rest of his or her life.

Call 918-492-4433 today to have one of the dedicated Tulsa car accident lawyers at Levinson Law, P.C. review your rollover accident case today.